When is the best time for diving in the Galapagos?

The cooler months are from June to December with temperatures ranging from 16 to 24 degrees Celsius. The warmer months are from January to June with temperatures ranging from 20 to 25 degrees Celsius. During cooler months, along with the Humboldt current, a large number of sharks swims northwards. This includes the whale shark, silky shark and the Galapagos shark. Although there are fewer shark sightings during the warmer months, it provides a better condition for diving in general. During the warmer months, you will get to meet manta rays and even hammerhead sharks.

Darwin Island and Wolf lsland are massive volcanic rocks in northwestern Galapagos and are considered to be one of the best diving spots in the world. They are home to the world’s greatest fish biomass with colourful tropical fishes and fascinating marine wildlife. Both islands are uninhabited and can only be reached on a diving cruise/dive ship. The islands are only open for divers. You will get to dive with sea lions, penguins, whale sharks, eagle rays, Galapagos sharks, turtles, hammerhead sharks, iguanas, golden rays, seals and many other sea creatures. The best way to get to know the Galapagos Islands is on a dive safari.

Darwin Island is the northernmost island in the archipelago. Encounters with whale sharks, hammerhead sharks and the Galapagos sharks are possible depending on the season. The main diving spot at Darwin Island is Darwin’s arch, nicknamed ‘the theatre’. It is an irregular bridge-like submerged plateau that is around 50 to 78 feet deep. The shape is a result of erosion and it has a ‘viewing’ platform 18 metres deep.

Wolf Island was named after German botanist and geologist Theodor Wolf, who is known for pinpointing the centre of the earth. It is situated slightly further south from Darwin Island. The island has a triangular shape with several dive sites. Around this area, you will get to meet the eagle rays, Galapagos sharks and even swim with dolphins! There are several challenging yet amazing diving sites of various levels of difficulty for experienced divers.

The Landslide at Wolf Island is an underwater terrain which consists of a steep slope covered with rocks and boulders hence the name. It is 165 feet deep with varying visibility. At times the visibility is only up to 30 feet while on other days it can go up to an impressive 100 feet. This is the best place to swim with hammerhead sharks, razor surgeonfish, moray eels, barracudas as well as sea turtles.

One of the more challenging diving spots at Wolf Island would be The Pinnacle. Due to tumultuous and strong water currents at this spot, it is also known as ‘the washing machine’. However experienced divers will be rewarded with a magnificent view of underwater caverns, a large population of marble rays and white tip reef sharks. The Pinnacle has a base of 120 feet.

Other diving sites on these islands include Shark Bay, the Caves, North Islet, the Elephant and the Anchorage. You are guaranteed to have a truly memorable diving experience that you will never forget.

The rare Vampire Finch (Geospiza difficilis septentrionalis) can only be found on Wolf Island and Darwin Island. It feeds primarily on the blood of other birds. The vampire finch uses its pointed beak to peck at the skin of the much larger Galapagos blue-footed booby. There is little question as to how it got its name!

Darwin and Wolf at a glance

Ways to get there: cruise and dive safari

A dive safari in the Galapagos Islands is on the top of the bucket list for many divers. At Galapagos PRO, we would love to help you fulfil this dream. We currently have two diving cruise ships in our program. Both can be booked individually. Single travellers can choose to occupy an entire cabin or pay lesser to share a double cabin with another single traveller.

Check out our Galapagos islands diving tours below now! 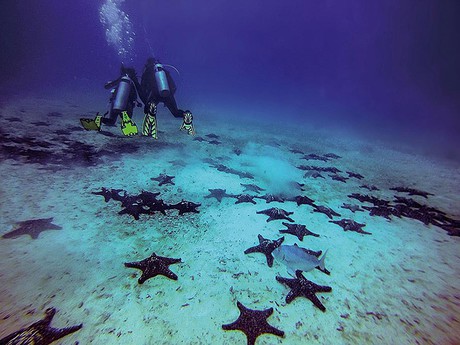 This website uses cookies to improve your experience while you navigate through the website. Out of these, the cookies that are categorized as necessary are stored on your browser as they are essential for the working of basic functionalities of the website. We also use third-party cookies that help us analyze and understand how you use this website. These cookies will be stored in your browser only with your consent. You also have the option to opt-out of these cookies. But opting out of some of these cookies may affect your browsing experience.
Powered by