When you arrive on Santa Fé, you will find a local sea lion colony resting on the wetlands of the sandy white beaches. Do not be surprised as they greet you with their loud ‘melodic’ voices! The male sea lions like to put on quite a show to display their dominance while nonchalant female sea lions simply sunbathe, take occasional dips in the waters, relax and enjoy the show. For bird watchers out there, the Galapagos Hawk often take their post among salt bushes. A narrow path leads through the desert-like vegetation into the outback of the island. If you continue along the path, it brings you to the cliffs where you will be rewarded with a breathtaking view of the bay.

The northwestern part of Santa Fé is home to Galapagos rice rats and land iguanas. The calm turquoise sea at the Santa Fé beach beckons visitors to join the sea lions, whitetip reef sharks, eagle rays and sea turtles for a swim or a bit of snorkelling. You will also be able to see dolphins and humpback whales between July and September in the open sea.

What sets Santa Fé Island apart from other islands is its gigantic Opuntia Cactus forest. The cacti can grow as tall as 10 metres and are by far the largest in the Galapagos archipelago. Under the massive Opuntia, the endemic land iguanas can often be sighted. They are there in hope for a fallen blossom or ripened fruit which is quite a delicacy for them.

Santa Fé Island at a glance

Ways to get there: hotel/cruise ship, day trip boat 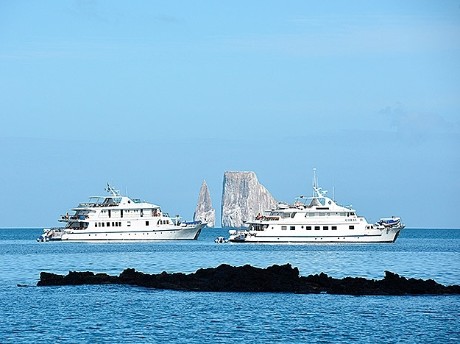 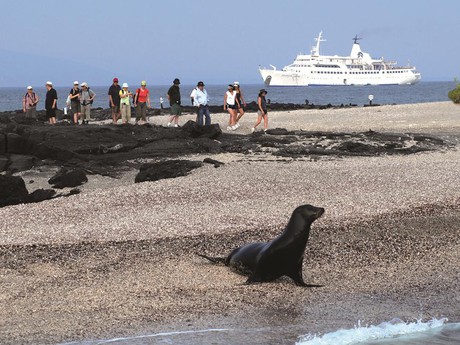