If you are looking to do something less ‘touristy’ in Ecuador, the beaches are perfect for you. The coast gives you a glimpse into the prehistoric period of the land with its landscapes, wildlife, and nature. There are sleepy fishing villages to explore where you can discover how and where the Panama hat was invented. Many talented and creative artists also work near the beach, and you can observe them as they create their masterpiece. Another fun thing to do at the beach is to spot for the famous Spondylus shell which used to be a currency in Ecuador.

As the beaches are not developed for tourism, you will get to enjoy the exceptional tranquillity that these locations offer. Exploring the Ecuadorian coast with a rented car is also very feasible. This allows you to explore this lesser-known region at your own pace.

The temperature at the coast is generally very comfortable throughout the year and water temperature seldom falls below 24°C. Below is a weather and climate table for our favourite town – Canoa.

The Ecuador beaches located along the southern coasts always hold an element of surprise for nature lovers. One of such places is Plata Island, which used to be a pirate hideout. Beautiful birds like the masked booby, blue-footed booby, and the frigatebird can be sighted on this island. As part of the Machalilla-National Park, the island is now under protection especially due to endemic plants and mangroves habitat on the island. Another beach worth visiting is Playa de Los Frailes which is also located in the Machalilla-National Park. From the beach, you will get to enjoy an incredible view of the Pacific Ocean and the deserted coastline. Discover the best time to travel to this region here.

Facts about Ecuador beaches and coastline

The coastal region is around 80,000 km² which take up a quarter of the surface area. It consists mainly of floodplains and there are high coastal mountains (Cordillera Costañera und Cordillera Chongón Colonche) at around 300-900 m high further up west. The western coastal region begins with palm beaches such as Mompiche beach, Portete beach, and Atacames beach. There are also several fishing villages, labyrinth-like mangroves swamps, and the less travelled jungle region in Cayapas. The southern coast  (including the half-island Santa Elena and Manabí) is shaped by the 60km long Guayas river and its tributaries, river Babahoyo and river Daule. The river system extends further than 36,000 km² and is the largest in the Pacific coast. The delta of Guayas river forms the biggest harbour on the west coast of South America! It also extends to the coastal lowland of Ecuador’s biggest port city, Guayaquil.

Between the mountain range and the Andes highland, there are large farming areas for growing tropical crops like bananas and coffee beans. Be sure to get a taste of Ecuador’s homegrown coffee and bag home a few packs of local snacks! The local produce is of high quality due to the abundance of rainfall and fertile soil. The coastal region is the most agriculturally rich area in Ecuador.

Facts about Ecuador at a glance 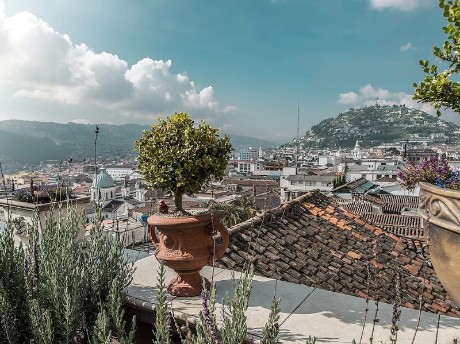