Galapagos Island Española is the southernmost island in the archipelago and is famous for the albatrosses there, which cannot be found on any other Galapagos Island. The months between March and December are the best time to witness the albatross mating season. Please note that Española Island is currently only accessible by cruise.

There are two main places to visit on the island and they are Punta Suarez and Gardener Bay.

In the western part of the island, you will get to see a breeding colony of marine iguanas in a splendour of colours. Lava lizards and Darwin’s finches are also endemic on this island.

On the high seas off the coast of Española, lucky visitors will get to see humpback whales traversing through the waves from July to September. These gigantic marine mammals can grow up to 15 metres long and weigh as much as 30 tonnes.

Gardner Bay on the eastern side of the island is an ideal place for diving and snorkelling with its majestic cliff formations. It also has a beautiful beach where visitors can relax and chill with sunbathing or sleeping sea lions. You can spot the grey mockingbirds easily and explore the underwater world with whitetip reef sharks, puffer fish, and other colourful tropical fishes.

Punta Suarez is situated on the western tip. There is a two-kilometre blue-footed boobies trail which brings you to the blowhole cliffs. The waves push seawater through a rock opening up to 20 metres in the air. The morning hours during high tide are the best time to observe this amazing natural phenomenon.

We offer a great Galapagos Islands cruise tour which includes a stop on Española Island along the southern route. This cruise is only available once a month which consists of a beach stay on Isabela Island.

Española Island at a glance

Ways to get there: by cruise ship 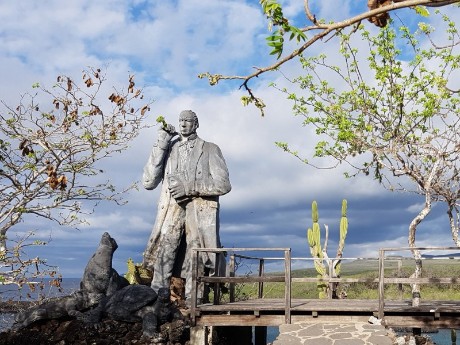