Galapagos Islands Floreana - Uncover the secrets of the past

Speedboats from Santa Cruz Island do not travel daily to Island Floreana. Hence pre-booking your day tour is essential to make sure that you get to Floreana Island as planned. You can also get there with a diving day boat.

Punta Cormorant is a crescent-shaped beach on Island Floreana with flour-like soft sand. The sand comes from eroded hermatypic coral thus giving it a perfectly smooth texture. During the months from December to March, the beach bustle with breeding and mating activities. The Pacific green Galapagos turtles mate on the shores while turtles and the blue-footed Galapagos finches bury their eggs in the soft fine sand. Stingrays also frequent the shores to hide from their predators. A trail will bring you to a lagoon where large groups of flamingos, white-cheeked pintails and many other magnificent seabirds gather. Flamingos and pelicans on the island build mud pie like nest which can be quite a rare sight.

Punta Cormorant is also one of the best diving spots on the southern side of the Galapagos Archipelago. The underwater volcanic formation is located in between 2 volcanic tuffs and is home to extraordinary marine biodiversity.

Corona del Diablo, also known as the devil’s crown, is another excellent place to snorkel and dive. The name comes from its half-submerged volcanic crater with a beautiful offshore coral reef. Here is where you can swim among sea turtles, colourful coral fishes as well as sharks.

Galapagos Islands Floreana was well known to pirates, whalers and European emigrants for its fresh water source which flows down from the 450-meter peak of Mt. Asilo de la Paz. Floreana Island is one of the few habitable islands among the Galapagos Islands. The island is known to have hosted several eccentric and intriguing people in the past such as a baroness with three lovers, pirates, criminals and even a dentist who pulled out all his teeth along with a series of mysteries.

Currently, there are around 200 inhabitants on Floreana Island. The Wittmer family emigrated from Cologne to Floreana in the early 20th century. Since the 1950s, they have been running a guest house with a restaurant on the island. Today they also own a cruise company with three luxurious Galapagos islands cruise under the TipTop series and Nortada, a diving cruise.

Here at Post Office Bay, the historic barrel that has served as a post office in the archipelago for over two centuries. Lonely sailors, away from home for years at a time, would stop at Floreana to restock their supplies of food and water. The homesick sailors devised a clever solution – they left letters in a makeshift ‘post box’ on Floreana, and when passing ships stopped on the way back to their home port, they would pick up all the letters destined for that place and deliver them.
To this day, the system is alive and well – each year thousands of visitors continue to leave letters for loved ones, and search for letters to bring home and deliver. To keep the tradition alive, hunt for a letter destined for a town near you and hand deliver it.

Floreana Island at a glance 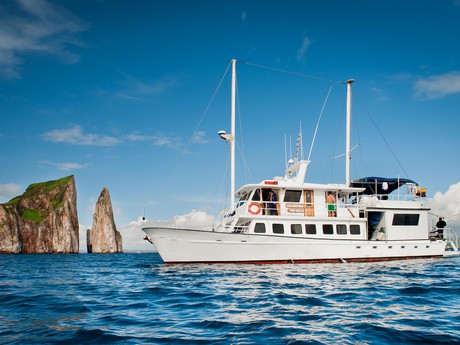